Given a chance to recreate any single dress I’ve seen photographs or paintings of, it would be from this painting of the future Queen Elizabeth I as a young woman. 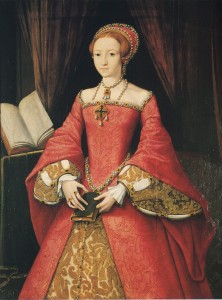 The red, and the gold, and the French Hood, and the turnback sleeves,  and the crazy embroidery… I’d be half-dead by the time it was finished, but it would be worth every second.

Since I decidedly don’t possess either the time or the money to make a super-faithful replica, for now I’m sticking to a process of slowly acquiring ‘second-best’ materials.  This will be long and involved, especially given that recreational sewing will probably die a swift and merciless death in the coming months, owing to a play I’ll likely be costuming.

Just keep an eye out for posts regarding this project: if there’s ever a rant about large quantities of pearls, this will likely be the root of it.